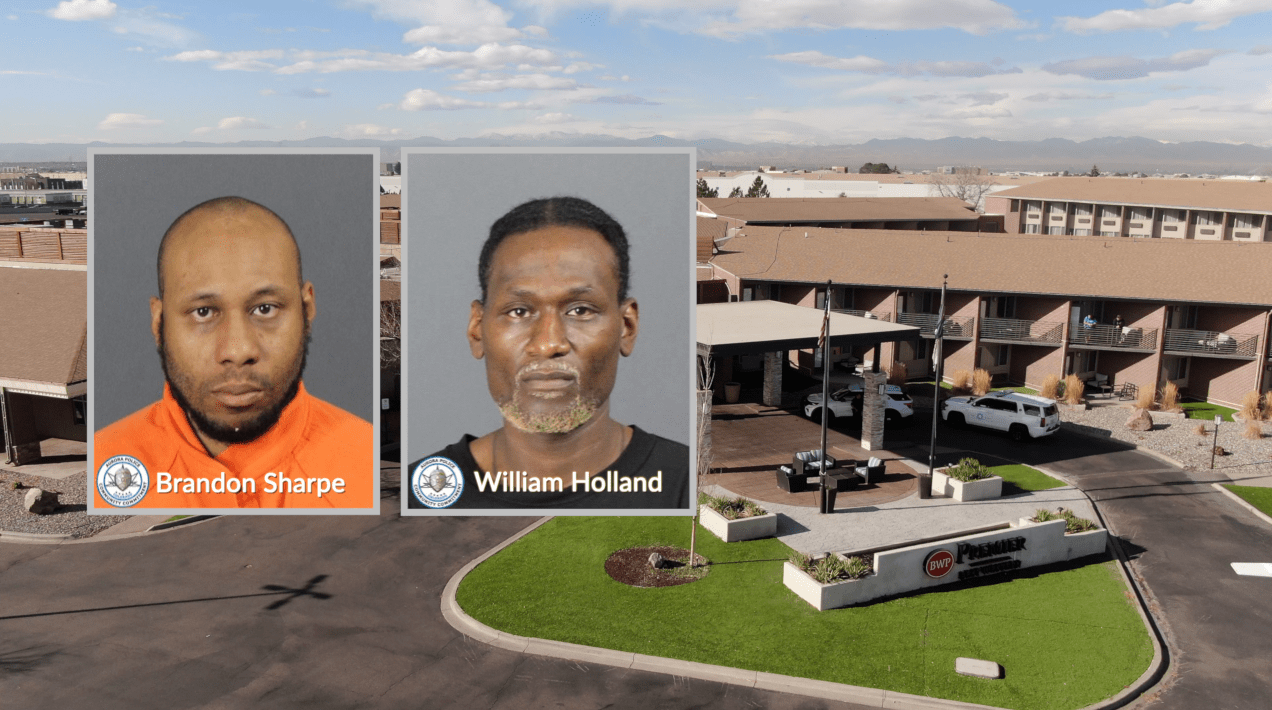 AURORA, Colo. (KDVR) – A Colorado man kidnapped at gunpoint in front of his wife and children must thank Aurora town police for their rescue.

Denver police officers, who were called first, are now under an internal affairs investigation to find out why they did not fully investigate the case.

Brandon Sharp, 34, and William Holland, 40, have both been charged with first and second degree kidnapping by Arapahoe County prosecutors. Three other so-called bounty hunters are still at large.

The kidnapping took place on November 4, when five men dressed in black and armed with rifles, who identified themselves as bounty hunters, stormed the apartment of José Salguero-Martinez, 25, in Aurora. .

Group leader Holland posted part of the alleged crime on Instagram under the pseudonym FRA Investigations with the caption: “This guy has been running from New York since 2015, 6 years later, here we are.”

A relative of Salguero-Martinez can be heard asking, “So you take him to the county, the cops aren’t picking him up?” And one of the so-called bounty hunters replies, “We do everything.” ”

Victim held for ransom in a hotel

Once at the hotel, Holland called Salguero-Martinez’s aunt and told her that the bounty hunters would need $ 1,500 or that Salguero-Martinez would be turned over to U.S. Immigration and Customs Enforcement.

At that point, the family realized they were the victim of an extortion scam and called Denver Police. But according to Holland’s arrest affidavit, Denver police “saw nothing suspicious” when they went to the hotel room and saw Salguero-Martinez with his captors.

Instead, the affidavit states: “The suspects produced some type of document stating that they were a funder which DPD accepted as legitimate. After reviewing the documents, DPD left the area and advised (the aunt) to do the same.

“Fortunately, Aurora PD was able to contact one of my ICE agents to get confirmation that this was not someone we had targeted,” said John Fabbricatore, director of the field office at Denver for ICE.

In an interview, Fabbricatore said the ICE would never allow bounty hunters to break into an apartment, kidnap someone at gunpoint and detain them in a hotel.

“No, this is not part of the immigration bond process. We don’t use bounty hunters, ”Fabbricatore said.

When police from Aurora arrived in the hotel room, they discovered that Salguero-Martinez was “handcuffed to waist chains that were secured with a combination lock.”

Salguero-Martinez would later tell police that he could hear the suspects arguing at one point over what to do with him and “one of the suspects suggested they just killed Salguero-Martinez.” This suggestion was denied by another suspect who said they couldn’t kill him because he had a wife and children.

Bianey Bermudez is part of the Colorado Immigrant Rights Coalition and has said that undocumented migrants are likely to be kidnapped for money because they are often afraid to ask the police for help.

“It’s horrible, but it’s not surprising,” said Bermudez, who added that the failure of immigration reform and a path to citizenship that could help millions of undocumented residents in America are partly to blame for the kidnapping of Salguero-Martinez.

“It’s a direct result of that, the way people are exploited,” Bermudez said.

William Ellenburg is a bail slave and said Holland went all wrong if he tried to execute an arrest warrant.

“He (Holland) shouldn’t have touched it, he shouldn’t have knocked on that door,” said Ellenburg, who added that bounty hunters and bail slaves are not allowed to forcibly enter. at someone’s house to make an arrest in Colorado.

“It was a nail in his own coffin. He just showed everyone that he and his team were a bunch of criminals, ”Ellenburg said.

Holland, who was supposed to stay out of trouble while on bail, is not compliant. As it turns out, Holland has six other criminal cases pending, including two earlier incidents in Arapahoe County where he was charged with impersonating a police officer.

As to the Denver Police failure to arrest Holland in the kidnapping / extortion case, Ellenburg said Denver Police “owe the family an apology.”

Bermudez said Denver’s lack of investigation “shows how small and invisible our community is and how unprotected we are.”

Fabbricatore said he wished Denver Police had called their office from the start, as Aurora Police did.

“It would have been ideal if they had done this,” Fabbricatore said, before adding: “In a situation like this, where we had a non-citizen who was kidnapped by an alleged bounty hunter, we need to make sure we work with local law enforcement to make sure that doesn’t happen.

Denver Police declined a request for an interview, saying it would be inappropriate to comment when an internal affairs investigation is underway.

Generación Mediterránea SA and Central Térmica Roca SA announce the expiration and final results of the offer and solicitation relating to all of their outstanding 9.625% senior bonds due 2023 and certain existing loans

Dummy websites are everywhere. Here’s how to spot them