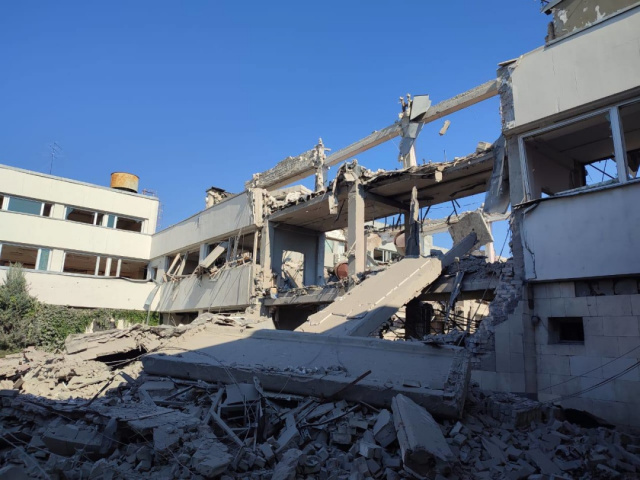 Day 134 of the invasion of Ukraine: a Russian missile destroys the University of Kharkiv, Moscow arrests one of its main generals – Novinite.com

Here are the highlights of the events related to the war in Ukraine in the last 24 hours:

A Russian missile strike destroyed a university in Kharkov

The Pedagogical University of the Northeastern Ukrainian city of Kharkov was destroyed by a Russian missile strike, President Volodymyr Zelensky announced, quoted by DPA and BTA.

The main building, the lecture halls, the university museum and the scientific library were affected, Zelensky said in his evening video address.

“This characterizes the Russian invasion with 100% accuracy. As far as the definition of barbarism is concerned, this strike qualifies the most“, Zelensky said.

According to him, the weapons sent by the Western partners of Kyiv work “very powerfullyand he praised their precision.

“And this significantly reduces the offensive potential of the Russian army. The losses of the occupants will only increase each week, as well as the difficulties in supplying themadded the Ukrainian president.

Zelensky called on citizens to spread information about the successes of the Ukrainian Armed Forces in the occupied territories, UNIAN reported.

“Russian forces have blocked any opportunity for people to learn the truth about what is happening and about our potential, which we are gradually increasing. Therefore, if you have the opportunity to talk to the inhabitants of the south of our country – in Kherson, Genichesk, Berdyansk, Melitopol and other cities and towns, tell them the truth. Take every opportunity to tell the inhabitants of the occupied regions that we remember them and that we are fighting for them“, urged the head of state.

Lt. Gen. Sergey Umnov, an adviser to Russian Interior Minister Vladimir Kolokoltsev, was arrested for abuse of power, BTA reported. Three generals from St. Petersburg are suspected in this criminal case. Kolokoltsev did not comment on the situation, British media noted.

Umnov was arrested in Moscow and taken to the temporary detention center at 38 Petrovka Street, according to the Moscow Center for Public Monitoring Commission (PMC), whose monitors visited him in the detention center, writes TASS. “The general told observers he was accused of abuse of power. He pleaded not guilty“, reads the press release.

The 57-year-old general worked in St. Petersburg, where from March 2012 to February 2019 he headed the main department of the Interior Ministry for the city and region. From this position, he moved to the post of assistant to Russian Interior Minister Vladimir Kolokoltsev. Since 2013, he has been a lieutenant general of police, and since 1986 he has worked in the services.

Several heads of the main department of the Interior Ministry of St. Petersburg and the Leningrad region have been arrested in connection with a criminal case for abuse of power, the Russian Interior Ministry has confirmed.

Umnov”expressed his complete disagreement with what he was accused of, calling it all stupidity and nonsense“, Eva Merkachova, a member of the Moscow PMC, told Interfax.

The media also reported on the searches of Alexei Semyonov, head of the State Department of traffic police in St. Petersburg and the Leningrad region. Local outlet 47news suggests the raids are linked to a criminal abuse of power case that began in 2020.

Abramovich’s detained planes were in unofficial talks at Ukraine

A relative of the oligarch told the publication that the February flights were carried out at the request of Ukrainian officials in order to organize humanitarian corridors. He added that US intelligence was aware.

Since the beginning of the war in Ukraine, Abramovich assumed the role of unofficial mediator between Kyiv and Moscow. At first, he was content to relay the messages of the parties, then joined the negotiations on the evacuation of the civilian population and the exchange of prisoners. It was because of this mediating role that Ukrainian President Volodymyr Zelensky asked the United States not to impose sanctions on Abramovich.

At the same time, Britain and the EU imposed restrictions on the Russian oligarch due to his close ties to Putin.

Abramovich and at least six other Russian oligarchs are now challenging EU sanctions in the EU Court of Justice.

In early June, a federal judge in New York issued an arrest warrant for Boeing 787-8 Dreamliners and Gulfstream G650ERs linked to the Russian billionaire.

The Federal Bureau of Investigation, which sought an arrest warrant for the planes, said Abramovich owned them through a series of offshore companies registered in Cyprus and the British Virgin Islands.

Polish Prime Minister Mateusz Morawiecki has accused the Russian and Belarusian secret services of hacking the systems of government institutions by publishing altered emails that allegedly show links between the government and the judiciary.

Morawiecki called the release of the emails “provocationaimed at sowing discord in Poland over Warsaw’s support for Ukraine in his war against Russia.

In leaked emails in 2019, his chief attorney Michal Dworczyk informed Morawiecki that he had discussed certain lawsuits with “President“Julia P. and that they were on hold.

The Polish press has been writing for several months about the alleged correspondence between Morawiecki and Dworczyk. The Polish government denies the authenticity of the correspondence, although some of those mentioned in it say it is genuine.

Email us at [email protected]

Effects and impacts of COVID-19 on the Bahamas estimated at $9.5 billion

FAA to give airports $1 billion for terminals and upgrades