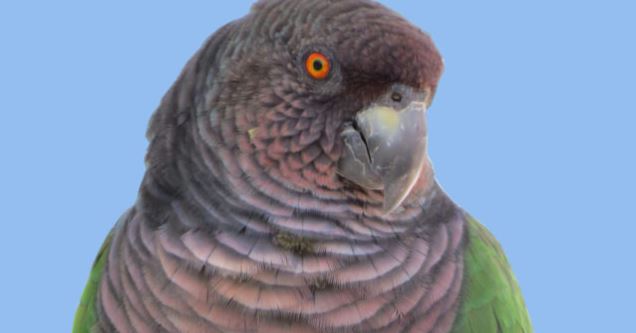 The Caribbean is said to be home to over 700 species of birds, including 171 species endemic to the region, meaning they are found nowhere else in the world. Several of these birds have appeared on postage stamps of individual territories, and even on the local currency (banknotes and coins) of some.

There is a lot of symbolism associated with the native birds of the Greater Caribbean. For example, several territories have given one (or two) species of their avifauna national significance by officially designating them or at least adopting them as their national bird(s).

The Montserrat Oriole in Montserrat, the Tocororo in Cuba, the Swallow-tailed Hummingbird – also known as the “Doctor Bird” in Jamaica and, of course, the Sisserou’s Parrot in Dominica are just a few examples.

Going back “to the south”, it may be interesting to note that Trinidad and Tobago has designated two, yes two, national birds – one for each of the islands of this twin republic. And again, the national flag of another country, viz. the Commonwealth of Dominica features a Sisserou or Imperial Parrot at the center of our flag design.

It is important to note that several territories in the Greater Caribbean have also included at least one bird as an emblem on their coat of arms or official seal. In some cases, these birds are the “supports” of one or both sides of the shield of the coat of arms.

*In alphabetical order of territory, the coat of arms of the Commonwealth of the Bahamas has a caribbean flamingothe country’s national bird, as one of the supporters of the shield.

*Barbadosthe Land of the Flying Fishes has a brown pelican as the right supporter of the shield on their coat of arms.

*Dominica The coat of arms features a pair of our national bird, the endemic and endangered Sisserou Where imperial parrot as supporters of the shield.

*French Saint Martin which shares part of its border with Dutch Sint Maarten, includes a Brown Pelican on the coat of arms of this territory.

*In the southern Windward Islands, the pomegranate dovewhich is endemic to Grenadeis one of two supporters of the shield on the coat of arms of the Caribbean Spice Island.

*Guyanathe only English-speaking country in South America, presents its national bird – the Canje Pheasant – on their coat of arms.

*The island in the Netherlands Antilles called “The Rock”, i.e. Sabawhich boasts of having the shortest commercial track in the world, has a Audubon Puffin – their national bird – on their coat of arms.

*The coat of arms of our ‘sister island’, Hélène de l’Ouest, St. LUCIAwhere Kwéyòl is widely spoken, features a pair of Saint Lucia Parrot like the two supports of the shield. This bird, affectionately called ‘Jacquot’ (Amazon versicolor) in Saint Lucia is different from the Dominica Jaco/Jako or Red-necked Parrot whose scientific name is Amazon arausiaca.

* The twin island state of Saint Kitts and Nevis in the Leeward Islands has adopted the brown pelican as their national bird which also features on their coat of arms.

*The coat of arms of the Land of Calypso, Soca, Steelband and Hummingbird, i.e. the Republic of Trinidad and Tobago, is unique in that it not only features four birds from three (3) different groups, but one bird represents Trinidad and another represents Tobago. The ecu brackets include a scarlet ibis (national bird of Trinidad) on the left, and a Cocrico Where Rufus-tailed chachalaca (national bird of Tobago) on the right. Of them hummingbirds also feature in the design of their coat of arms.

*The US Virgin Islands do not have a coat of arms in itselfbut they have adopted an official seal whose design includes a quit banana – their national bird – in the center, and is one of the biggest design elements of the seal. ‘Sikiye is the Dominican Kwéyòl name for this bird.

*Still to the north, the Turks and Caicos Islands (TCI) are a British territory whose coat of arms features more than one species of bird. This territory included a caribbean flamingo as well as a brown pelican on their coat of arms.

Thus, with the region’s diverse flora and fauna, no less than eleven territories collectively feature ten species of birds (plus hummingbirds) on their coats of arms and official seal. The pelican appears on the coat of arms of three territories and the flamingo on two.

And so, among the wider Caribbean, there is national symbolism associated with the Audubon Shearwater, Bananaquit, Brown Pelican, Canje’s Pheasant, Caribbean Flamingo, Cocrico, Grenada Dove, Hummingbirds, Scarlet Ibis, Sisserou Parrot, Saint Lucia Parrot and other birds. which have been declared national birds of individual territories but do not appear on their coat of arms, such as the Parrot of St. Vincent, the Doctor Bird of Jamaica and many others.

The presentation above could be seen as a bit of Caribbean citizenship that should get us out of our offices, homes, etc. watching the fascinating bird life that surrounds us.

Readers who wish to familiarize themselves with the coats of arms of the various territories can search the Internet on Google Images. Special thanks to “Surgeon General” Yannik Bethel for surgically and carefully freeing Sisserou from the cage.