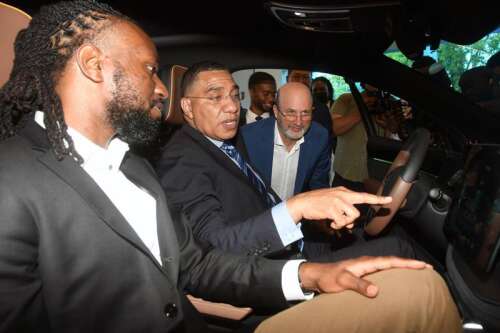 XAVIER Gordon thought his meeting with financier Zachary Harding had failed and began to doubt his vision of making the Caribbean the world’s most advanced electric vehicle (EV) market would ever materialize.

Gordon’s vision grew out of an experience driving an electric vehicle in Canada and he came to the conclusion that the Caribbean was an ideal market for electric vehicles for two reasons: the region’s temperature profile and the size of countries mean relatively short driving distances.

Five years ago, he therefore left Canada, with his partner Carey Escoffery, to return to his native country, Jamaica. He hoped meeting Harding would immediately produce a partnership that would help him achieve his vision. But it will take a few months before the Jamaican businessman calls him back saying: “Let’s go to work”.

This partnership between Gordon, Escoffery and Harding will culminate in the official launch of Flash Motors Company Limited in March 2022 as Jamaica’s first and only dedicated electric vehicle supplier. But the company’s goal was still to provide a full range of world-class electric vehicles, electric vehicle service equipment and charging network solutions across the Caribbean.

Flash Motors’ launch would come with the announcement that the company has partnered with Stewart’s Auto Sales for the distribution of China-made Build Your Dreams (BYD) electric vehicles.

While many considered the launch of Flash Motors the start of the business, Gordon said Jamaica Observer that he had to rely on Harding’s advice for the past five years.

“He realized that the benefits of Flash Motors were not just for individuals but also for government fleets, especially transit agencies. [So] we started working together around 2018 to see how we could deploy electric vehicles in fleets,” he explained.

Since then, Gordon and Escoffery have worked with the governments of Saint Lucia, Barbados and Bermuda on electrifying their fleets while educating them on business models that focused on cost savings and protection. of the environment. In Barbados, the company introduced 25 buses into the local transit agency’s fleet.

“Our work across the region has given us insight into potential customers and, more importantly, stakeholders in each [Caribbean market] we will need to achieve electric mobility. So our advisory work really informed us of potential issues and helped us to really focus on finding solutions to those issues,” Gordon said. Sunday finances.

With this in mind, Flash Motors has already identified dealership partners across the Caribbean who will distribute BYD vehicles. However, Gordon notes that the company is cautious about making announcements until it has tested its business model.

On that note, he said the company is still in its pre-launch phase.

“We still consider ourselves at the pre-launch stage in Jamaica; however, Jamaica will be our first launch market,” he said.

According to Prime Minister Andrew Holness, the data collected during the pilot project will help the government to implement its electric mobility policy. He added that as part of the implementation, the government can become a “first mover” by electrifying its fleet.

Meanwhile, Gordon noted that the market response to Flash Motors’ offer in Jamaica has been overwhelming.

“…What we try to do is manage expectations in each of our markets. [in other markets] are ready for the amount of interest they are going to receive in the pre-launch phase, we are very strategic in the timing of our announcements,” he stressed.

Given the positive results of the company’s partnership with Stewart’s Auto Sales so far, Gordon said he wants to ensure that installations, training, sales and service are up to standard in other jurisdictions. Caribbean before launch. The CEO, however, pointed out that the company would announce its other reseller partners in the region over the next 18 months.

When asked if Flash Motors would introduce other brands of electric vehicles, the CEO said, “We will introduce other manufacturers to the market next year so that BYD will be present in the region and we will continue to develop our offers with other brands. as well.”

Biden will announce climate actions at a former coal-fired power plant in Massachusetts.