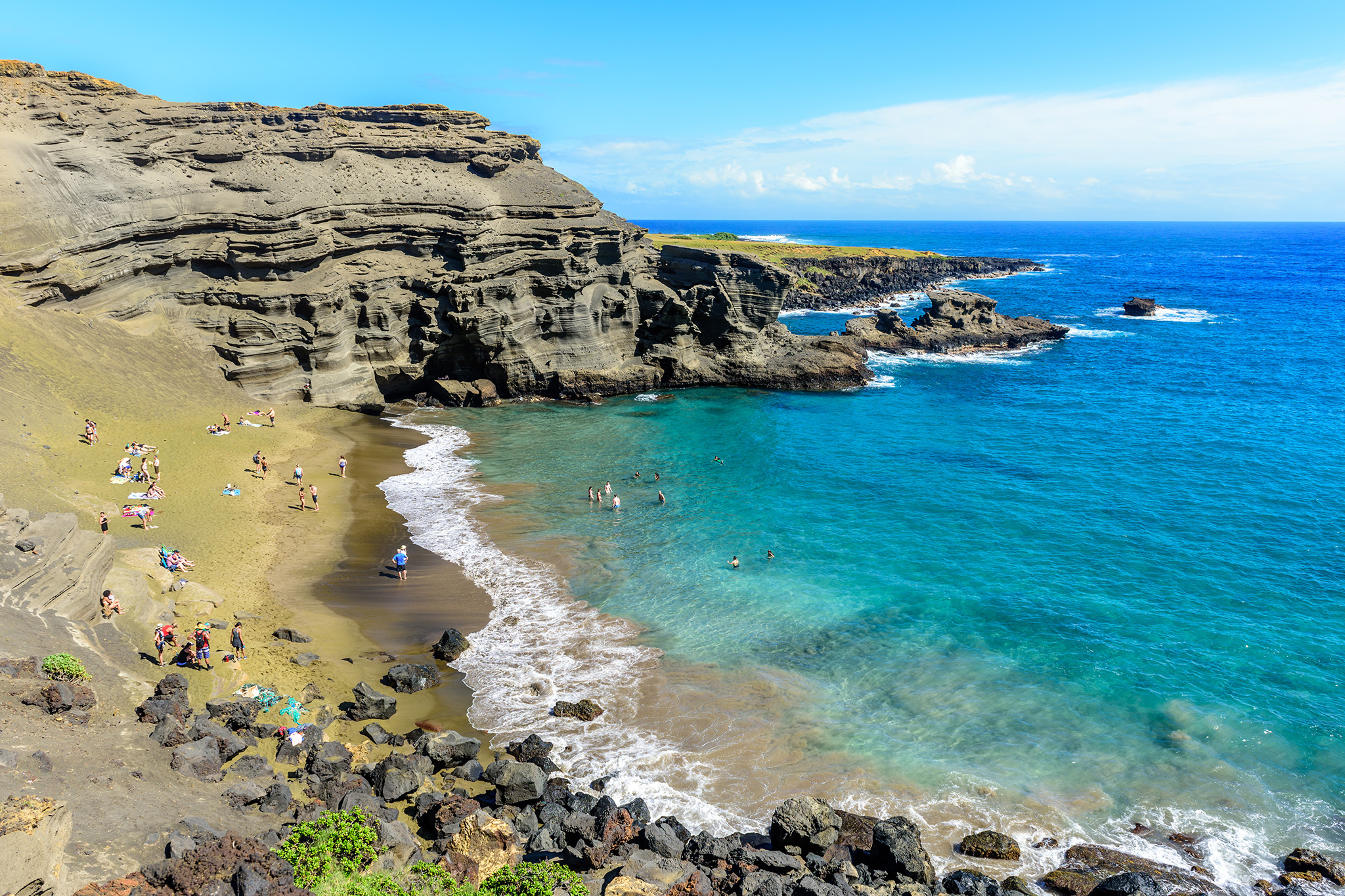 There are only four green sand beaches on Earth, and Hawaii has one. Located at the southern tip of the island of Hawaii, in the Kau District, Papakolea Beach has rare olivine sands, created by a volcanic cinder cone. But the beauty of the region masks the problems that surround it.

An hour and a half drive from Kona and two hours from Hilo, South Point is rural and undeveloped. Visitors and residents have severely scarred the land by illegally creating their own roads. A significant amount of damage was caused by the resulting network of dirt roads, with ruts as deep as 8 feet, to get to the beach and other surrounding areas of Ka Lae (Hawaiian for “The Point”) , nicknamed the southernmost point of the United States.

“This sacred and precious place for the people of Kau has been desecrated and exploited by off-road enthusiasts, thoughtless actions of visitors and sport fishermen despite the presence of iwi kupuna [ancestral bones and burials] and sacred sites,” the Department of Hawaiian Home Lands said in a 2016 South Point Resource Management Plan outlining the issues. “The people of Kau are pleading to ‘let the land heal’ so that what is left of this fragile ecosystem can be shared with future generations.”

DHHL is the governing body responsible for managing South Point’s lands, which are held in a trust to be used for Native Hawaiian beneficiaries.
But with much of its budget earmarked for Hawaiian homes, the department lacks the funds to have someone there 24/7 to enforce the rules.

“Anything off-road is illegal unless they use the county dirt road to the Kaulana boat ramp,” DHHL spokesman Cedric Duarte told SFGATE. During this time, illegal commercial vehicle companies have also emerged.

“The land has been exploited by individuals providing illegal shuttle services who care only for economic gain, even at the expense of land and resources,” adds the management plan of DHHL.

It’s a common occurrence here. Locals woo visitors who show up on foot or by car, and $20 allows you to travel miles of dirt roads to the beach in the back of a van. Nobody tells visitors when they arrive that it’s actually illegal to do so, and nobody regulates offers at the entrance to Papakolea.

“People are free to do what they want and our cultural sites have been desecrated. Roads are created where they are not supposed to be, and when heavy rains occur, water floods and follows these roads to sites, contributing to erosion at a faster rate,” Nohea Kaawa , a Hawaiian cultural practitioner and longtime resident of the neighborhood, says SFGATE.

The impact goes beyond the territory.

“Loose soil sinks into the ocean, covering the reef, and then the fish population starts to decline because the coral starts to die,” Kaawa pointed out. “We all know that coral needs sunlight to live,” she says. “Traffic in the area has also decimated the ohai, a native shrub with orange and red flowers that now only grows wild in a few places along the coast. … There are families carrying ‘ ohai’ in their name, so you know the plant was important in that area. As Kanaka Maoli (Native Hawaiians), we are connected to our native environment; plants are ohana (family).

Scientists believe that South Point is where Polynesians, likely from the Marquesas Islands, first arrived in Hawaii as early as 124 CE
They found a new green land ideal for fishing and rich in agriculture, and eventually settled there.

Remnants of where the ancients moored their canoes, lived, worshiped and buried their dead can still be found. The faces, native art and messages that ‘the kingdom of Hawaii is still here, we have never left’ etched into tree stumps and lava rock over the centuries are monuments to these travelers. .

For these reasons, Hawaii has designated approximately 710 acres of land as a National Historic Landmark.

Kau District comprises an area of ​​929.7 square miles with a population of 9,773 people, according to the 2020 census report. Populated areas for residents and visitors are the nearby towns of Ocean View, Naalehu and Discovery Harbour. Most live off abstracted water and many live entirely off the grid.

The area is serene and secluded. At night, crickets – and invasive coqui frogs – serenade each other, almost in harmony with the twinkling display of celestial diamonds that dot the black velvet sky. Instead of the lights of the houses lining the shore, only a few gleams are seen.

Matt and Rikki Prowse are residents of Ocean View, where they run the Kau Ohana Farms nursery, as well as manage a vacation rental on their 3-acre property. They moved to South Point from Northern California a few years ago and love the lifestyle and “perfectly temperate year-round climate” the area offers.

After their move, the couple tuned in to the area’s “Wild West” vibe. Residents own acres of land, some with beautiful gardens that look across the lava-laden landscape, while others have ramshackle cars and dilapidated structures. The Prows say there’s a lot of talk about protecting land in their community, but there’s a pervasive feeling that some residents are letting their properties go.

Prowse says they’ve discovered that most Kau residents are a mix of mainlanders, many of them Alaskans who feel comfortable with the remoteness, and generations-old Hawaiian families, as well as some residents of the Marshall Islands. Largely people who are used to living affordably and undisturbed, Prowse says.

The Prows want the area to remain rural and away from the overtourism found in other Hawaii locales, but since the area has one of the highest poverty rates in Hawaii, they wonder if the industries cannot be built around ecotourism that both celebrates and protects. the land of Kau.
But one thing is certain: illegal trips to Papakolea aren’t taxable and don’t really support the community beyond where the driver spends it.

“Tourism here is for the rich,” Prowse says. “They can have a dream day hiring a helicopter and going to a private beach that locals can’t get to because they have to cross private land, but wealthy tourists can. There are so many green tourism opportunities here, we just have to decide what we want to be and then build industries around that.

For example, if an authorized tourist group organized hikes or horseback riding. There are no tour groups currently authorized by DHHL to do so.

Chris Paterson, owner of Kailani Tours, says they don’t do legal tours in South Point because the road there is rough. “We also think this is one of those ‘neighborhood’ stops that we’d rather not disturb local residents. We feel the same way about Waipio and a few other places on the island,” says Paterson.

“If the county ever wanted to regulate things and have a transportation company run shuttles, I would consider that,” Paterson said. “Also, if the local community would prefer a shuttle service or a single transport company to do well-run tours there, we would certainly provide that service. Finding harmony with the community while serving our visitors is the balance we always seek to strike. It’s not always easy, but it keeps us focused on our mission.

However, the 2016 DHHL Resource Management Plan for South Point has yet to receive funding, Duarte says. Many visitor-related issues could be resolved if the plan were implemented – it includes the addition of sanitary facilities, parking fees, training and assistance for people seeking to set up legal businesses, as well as the hiring an area manager to monitor closely – but it requires funding and resources.

“It’s very difficult for lawmakers to give us resources for something like this when they know we need resources for homes,” Duarte says. “On the to-do list, this one has to be high.”

He agrees that Kau is a bit like the Wild West due to the lack of law enforcement, explaining that the county’s police are themselves limited in resources. With the region being so remote, they focus their efforts on keeping people safe in the more populated areas.

“The real problem won’t be solved by creating a management plan that will take DHHL 20 years to implement, the real problem is that humans need management,” Kaawa says. “Humans must learn to exist in a space with proper protocols and respect for our cultural landscapes. Kau needs on-site enforcement to ensure there will be consequences if people don’t do the right thing. If there is no application, what is the use of creating rules? »