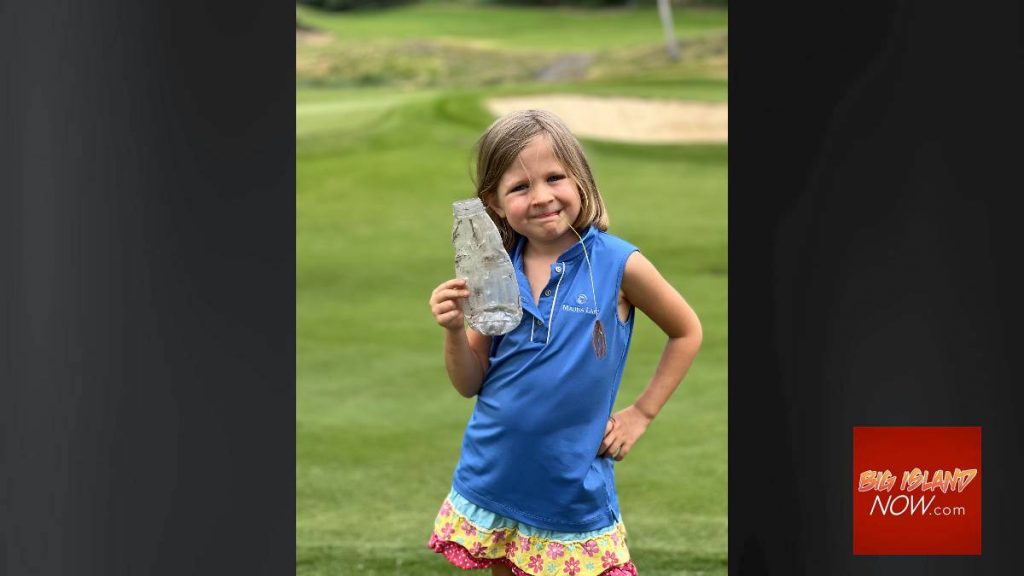 Shea Cochran is like many mothers in that she tries to pass on some of the precious principles of life to her children, just as her parents taught her.

Exercise and sunshine feel good, giving feels even better, hard work gets you far and leaving a cleaner place than you found it is as rewarding as anything.

And the method the Kailua-Kona mother-of-two uses to implement such principles is through recycling, one piece of plastic or aluminum at a time.

“Maybe it feels like a weird family tradition,” Shea recently said. “But I think it really helps with the concept of money, for them to work and for them to understand different points, which I think is important.”

These points are the points listed above, and they sink in for 5-year-old Grace Lee, who chose to donate 10% of the money she raises by recycling to a homeless man who spends time in the neighborhood of his school, AlaKai Academy. For 7-year-old Carter, still in love with animals, it was obvious to choose the Hawai’i Island Humane Society as the recipient. Now, every time the family deposits the donation money, they make a day of it by watching the dogs.

It might seem like a strange family tradition — the state’s HI-5 deposit program reimburses 5 cents for cans and bottles swapped — because Cochrans rarely come across other ‘ohana who put so much coordination into it.

Not that they talk about it much: but if it were to come up in casual conversation, well, it can be easy to determine the other party’s level of devotion.

“I haven’t found anyone else who’s been really successful,” Shea said.

But the dedication to recycling came to Shea through her upbringing.

Shea’s father, Dan Ostrander, taught the practice to Shea when she was growing up in Chico, California, as a lesson in the value of earning and saving her own money. Her father worked in construction and took Shea to his construction sites, where cans and bottles littered the fields. (California started its buyback program in 1989, Hawaii did so in 2005). With that, her father added the caveat that if Shea deposited her winnings in a bank account, he would double the amount. The only rule was that once she put it down, she couldn’t take it out.

“That’s how I started to understand the concept of interest,” she says.

And the value of savings.

Since then, Shea has pocketed a small recycling nest egg over her lifetime.

“Some of the money I still haven’t spent,” Shea said. “It’s kind of my emergency money.”

Fast forward all these years later and the 41-year-old has implemented a similar method, then some, with Grace and Carter, who have taken to picking up bottles and cans like most kids go to the house. Beach.

They collected for about four years, and each now has their own savings account. That’s not all. The pair have also funded their own eTrade accounts which Shea has set up for them, largely through the work they have put into collecting plastic, aluminum and glass and the money they recover. by redeeming them. Shea selects the stocks for them, of course, but the same rule applies, once the money is deposited, it stays deposited.

“We kind of looked small and that was really fun because when they go to the store, they’ll want to buy something, and I’ll be like, ‘Well, it’s been two days of cans, do you really want that?'” Shea said.

“Oh,” the kids will say and re-evaluate their desires right there in the store aisle.

“It puts things into perspective,” Shea said. “Carter doesn’t understand money yet, necessarily, but when you tell him how much work it was going to cost him, it makes him rethink things.”

But the most rewarding benefits of their routine are what they’ve learned besides the dollars and cents: donating, cleaning up their community and getting out in the sun as a family, Shea said. When Grace hands over her money to the homeless man each week, he thanks her and calls her “aunt”.

“I love giving it to the people I really love,” Grace said of why she loves recycling.

The Cochrans are not alone: ​​many people recycle on the Big Island.

According to the Hawai’i Department of Health, which is responsible for tracking HI-5 program numbers, 115 million items were redeemed at Hawai’i County recycling centers between July 2020 and June. 2021.

Approximately 10 million items were returned per month during this period, with aluminum items typically accounting for around half of the monthly total.

Still, 115 million recyclables represent only 20% of the statewide total recycled during that time – 602 million items. O’ahu accounted for nearly 60% of that amount, but the Big Island’s total was good for the second-highest number by county in the state.

The rates paid by redemption centers are determined by the state, which reviews its formula every few years. He currently pays $1.60 a pound for cans, $1.32 a pound for small plastic bottles and $1.20 for glass.

Recycling centers here, like Mr. K’s Recycling in Hilo, ship their collections to mainland businesses who then use the items for their purposes.

The method behind Grace and Carter’s operation is similar to the one Shea learned.

The girls’ father, Lee, builds houses and works on construction sites, like their grandfather, so Grace and Carter visit the work areas, just like Shea had done. In fact, Shea’s father still recycles to this day, so when the Cochrans visit, they’ll gather as a family, spanning three generations.

What is the biggest difference between the two states? California seems to accept everything, while Hawai’i is more picky: no bottles of wine here, for example. Gatorade and Heineken bottles, meanwhile, are the most ubiquitous finds on the island, while Sierra Nevada bottles reign supreme in Northern California.

But the practice is so much more than the commodities, or the savings or stock accounts that come from it.

The Cochran girls are really sad when they see people throwing trash and they always want to bring plastic bags to collect bottles and cans when they go for a walk or go to the beach.

But that doesn’t mean the bounty on their catches isn’t significant. Rather the opposite. This helps make practicing even more fun, 5 cents at a time.

Heck, the girls have been known to encourage Shea to jump out of the car when they’re waiting at a red light and spotted a stray can or two on the side of the road. What Shea did. What’s a good family tradition if it’s not a little crazy?

“It’s awful sometimes,” Shea said with a laugh. “Even though I did this for them just to make them happy.”

Improve your credit with a debit card

Towards greener pastures: how FM can provide the needed boost to the renewable energy sector