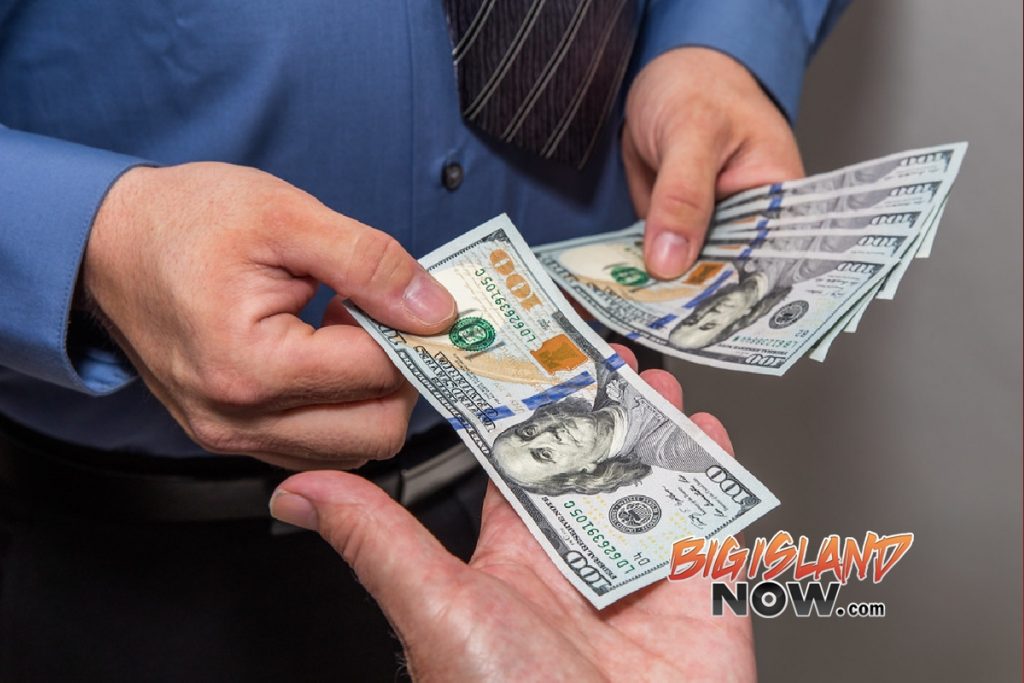 ‘Not good news’: Inflation in Hawaii will be the highest in decades and everything will be affected

And it’s pretty much everywhere, no matter what you buy.

In fact, according to the Hawaii Department of Business, Economic Development and Tourism, that $100 will be about $6 less.

This means, taking the example of groceries, if you fill your wagon with the same hundred dollar worth of food in 2022 as you did in 2021, because of inflation, you would only get $94 worth of goods This year.

This is what inflation looks like: less for more. And inflation, Hawaii economic experts agree, is there for the entire calendar year.

“It will be real,” said Eugene Tian, ​​chief research and statistics officer for the state of Hawaii. “That means people’s purchasing power will go down. So with the same amount of money, they will not be able to buy the same amount of goods as last year.

How bad will inflation be in Hawai’i, a shipping-dependent state?

The short answer is that it will be the worst the state has seen in the past two-plus decades, experts said. The 4.8% projection is conservative by some estimates, but still double what it was last year, which was 2.4%.

But certain trends in the economy will mitigate the direct impact on Aloha State. Also, on a larger scale, Hawai’i is expected to fare better than the rest of the United States, which has seen inflation around 8% so far in 2022 and is expected to remain around 6.2%. .

Tian’s office, known as DBEDT, is the one that calculates the 4.8%. The forecast is in line with projections from other economic experts, including the University of Hawaii Economic Research Organization, or UHERO, which puts it even higher at 5.5%.

There is no immediate way around this, the outlook is not rosy. People will get less for more.

Reasons behind inflation – and war is only a small component

But inflation this year was predictable, experts added. While Russia’s invasion of Ukraine was relatively unexpected, the other upside factors were not.

Three main factors explain the increase in inflation, and among these three factors, only the war in Ukraine can be considered as a surprise.

War has an impact. Launched on February 24, it provoked a boycott of Russian oil on the majority of the world market. UHERO didn’t factor the war into its latest numbers, which are based on Honolulu numbers, but DBEDT did.

Tian explained that if the military conflict had never happened, Hawaii’s inflation would have been around 3.8%, still higher than the year before, but not double. According to DBEDT’s forecast, the invasion raised Hawaii’i inflation by one percentage point.

The reason that figure isn’t higher is that Hawaii doesn’t import as much oil in general compared to the mainland United States, and not a lot, on a large scale, from Russia.

Last year, Russia was Hawaii’s second-largest importer of foreign oil to the islands, sending 6.92 million barrels of crude oil in 2021, or 27% of foreign oil imports. A substantial figure, Tian pointed out, but well below the number one importer, Libya, which accounts for 68% of the market.

Tian’s figures are also based on the fact that the war did not last the whole year. No one can say for sure, but the bureau’s method is to use the best information possible.

“Nobody expects the war to last beyond the summer,” he said.

The other two main factors for rising inflation were easier to predict than the war, as well as why Hawaii inflation would be even higher than last year even without the conflict.

They were the result of federal relief money pouring into residents’ wallets during the pandemic and the resulting supply chain shortage that has hit businesses across all sectors due to the increase in demand for goods created by the free flow of money.

These were predictable as they follow the natural ebb and flow of the macro economy, Tian explained. When consumers have more money, they spend it. When demand for goods increases and supply chains struggle to meet it, prices rise. To control the growing increases, the Federal Reserve raises interest rates, which means it costs more to borrow money, thereby slowing the volume of money lending and, in turn, slowing the expense request. This slows down inflation, but also economic growth.

The Fed, meanwhile, is expected to adjust inflation rates four to six more times this year to try to control what is happening.

The other reason Hawaii’s inflation rate is expected to stay below the national average is that Hawaii, by comparison, doesn’t import as many goods as the rest of the United States, even though it’s generally considered an import. Dependent state. Just on import volume, Hawai’i does not compare to the continental United States. The state also doesn’t consume many more petroleum-based products than the rest of the United States, despite being considered a highly energy-dependent state isolated in the middle of the Pacific Ocean.

Hawaii’s total share of oil spending is about 5%, while the national average is 4%, the UHERO director explained.

Make no mistake, inflation will be felt

That said, inflation, as Tian pointed out, will be real and Hawaiians will feel it, especially those on fixed incomes with less room to maneuver if they aren’t already.

“Where it hits people’s wallets is obviously in gasoline, but even more so in electricity,” Bonham said.

Hawaiian Electric has already announced that it expects a 20% increase in energy bills for residents of the Big Island.

But there are other areas residents should keep an eye out for, like the aforementioned grocery stores. Bonham said he expects grocery prices to rise more than in other regions due to the reliance on oil, which the agriculture industry needs to produce food.

“In many cases they’ve risen more than oil,” Bonham said.

The commodities sector has seen the strongest gains so far. Commodities are essentially commodities – all items that people tend to buy.

In January, the commodity inflation rate was 10.7% in Hawai’i and 12.3% on the mainland. In February, the metropolis saw it climb to 13%.

So buying the same amount of gasoline this year could mean going without other areas for some people.

“It means skipping a meal or cutting back on something that isn’t quite a necessity,” Bonham said.

Captain Cook resident Danny Shirley is one of those regular residents who has noticed it before. Retired, Shirley has lived on a fixed income for several years. He shops in Kealakekua and South Kona and has already reduced his “treats” like the chips, candies and other fun snacks he used to add to his and his wife’s grocery cart. . Splurge at McDonald’s? Forget that.

Shirley said he braced for the price hike as soon as he saw gasoline prices rise. It already appears to have wiped out the record 5.9% increase in COLA that Social Security added this year.

“I noticed it, but again, I was prepared for it,” Shirley said of what rising gasoline prices meant for prices in other sectors. “It looks like they are 20% higher than they should be.”

Inflation forecasts are just that – forecasts

UHERO is the office that pegged inflation above DBEDT, estimating 5.5%. UHERO’s calculations also didn’t include the war in Ukraine, and Bonham said he expects their latest calculations to go even higher.

But there are some silver linings, both experts agreed.

Inflation is rising, yes, but so is everything else, including wages and tourism figures. Hawai’i is seeing pre-pandemic numbers for the first time since 2019. Industry is the state’s economic engine, and international tourism is also returning this year. An influx of Japanese visitors to add to mainland tourists who have already returned in significant numbers will be a major reason why Hawai’i is expected to experience further economic growth at the end of 2022.

According to DBEDT projections, the state will experience a growth rate of 3.4% this year.

Both offices see this as a one-year peak, of sorts too, which Bonham called a “low point” in the grand scheme of things. UHERO estimates that inflation will fall to 3.3% next year, while DBEDT forecasts 2.6%.

In addition, they reminded residents that these are projections. No one can say for sure what will happen that might impact it, for better or for worse.

One number the projections have included so far is what happened in the housing industry – at least according to the statistics. Perhaps remarkably, Hawaii’s numbers indicate the state hasn’t had a dramatic impact on rents and housing the way it has on the mainland.

Several of them told Big Island Now that they have never seen rental prices rise more than they have in the past six to 12 months.

Krystal Vartanian Jacobs, property manager for LUVA Real Estate in Kona, and Gretchen Osgood of Hawaiian Isle Real Estate are two industry players who said prices were the highest they had ever seen.

Vartanian Jacobs recently rented a three-bedroom apartment for $3,600 a month, up from $2,400 last year. She didn’t price abuse, just adjusted the rates for a then-vacant home to current market conditions at the request of the owner, she said.

The listing didn’t last long in the market either, she pointed out.

“Here it is absolutely swelling,” she said.

Osgood, too, recently had a similar rental with a similar increase. She also saw the price of a Kona Sea Ridge condo jump $100,000 in six months. What she sees, she says, is the “biggest jump I’ve ever seen”.

This is why both are skeptical that the number of states reflected in the housing industry will remain as it is now. The same goes for another property management company in Kona, which declined to report, but said it was experiencing a 40% increase in rental prices.

They all attributed it to a lack of supply and, of course, inflation.

“It’s on every level,” Osgood said.