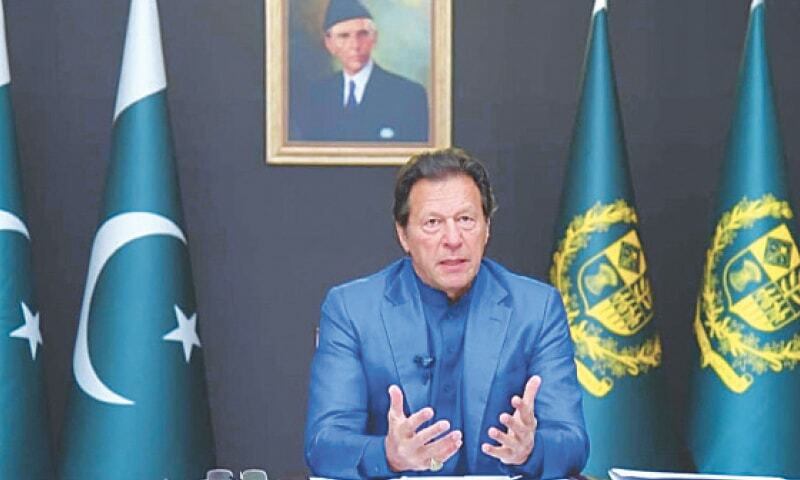 PM against rivals with relief

ISLAMABAD: In a high-profile 42-minute address to the nation, Prime Minister Imran Khan stunned critics on Monday by announcing a “relief package” for Pakistani citizens hit by inflation, slashing petrol prices and diesel at Rs10 per liter and electricity at Rs5 per unit with a commitment that they would not be increased until the next federal budget.

Prime Minister Khan also announced a major tax incentive for the information technology and industry sectors, highlighted some of his government’s major achievements, provided justification for the recently enacted Ordinance Amending the Law on cybercrime and revealed that Federal Minister Murad Saeed could file a libel case complaint in the UK.

The prime minister announced the “relief package” at a time when Pakistan People’s Party chairman Bilawal Bhutto-Zardari is leading a long march to the federal capital in a bid to overthrow the Pakistani government led by Tehreek-i- Insaf. However, Prime Minister Khan did not mention the long march in his televised address.

Mr Khan criticized the previous governments of the Pakistan Peoples Party (PPP) and the Pakistan Muslim League-Nawaz (PML-N) for pursuing the “bad foreign policy” of siding with the United States in its war against terrorism. He called on the people not to elect those politicians who hid their wealth and assets in offshore banks because they are the ones who would compromise on foreign policy.

Comparing the state of the economy under his government and during the PPP and PML-N regime, the prime minister painted a rosy picture and claimed he had put the economy back on track.

He added, “We are reducing the electricity tariff by Rs 5 per unit, after which the monthly electricity bills will be reduced by 20-50 percent.”

“We are not raising the price of petrol and electricity until the next federal budget,” he continued, while explaining that the government supported the subsidy of one billion rupees on the two services. public despite difficult economic conditions.

For unemployed graduates, the Prime Minister said, a 30,000 rupees per month internship program was being launched. He said the money would be disbursed through a transparent, merit-based system. He also announced 2.6 million scholarships for which Rs38 billion would be allocated. He said Rs 460 billion would be earmarked for providing interest-free loans to young people for start-ups, farmers for agriculture and low-income groups to build their own houses.

In addition, he said, there was the Ehsaas scheme under which a cash grant of between 12,000 and 14,000 rupees was given to eight million deserving families.

The Prime Minister also announced incentives for the promotion of the information technology sector, including a 100% tax exemption for companies and the self-employed, a 100% exemption on the repatriation of capital and foreign exchange, and the elimination of capital gains tax for startups. He said Pakistanis abroad would get a five-year tax holiday for investing in the country.

Amid strong opposition to the Pakistan Ordinance 2022 and the recently amended Electronic Crimes Act (Peca) by lawyers, journalist communities and human rights organisations, the Prime Minister Khan said the law was enacted six years ago despite the incumbent PTI government failing to amend it. “The leader who does not commit corruption and does not violate laws will never be afraid of free media,” Khan said.

The amendment was made to tackle the filth of child pornography and the harassment of women on social media, he said. “More than 94,000 cases related to women’s harassment, fake news and photos were pending with the FIA ​​and of these, only 38 cases have been resolved so far,” he added.

Without getting the official version, the media alleged that funding for Shaukat Khanum Memorial Hospital had landed in the PTI account, he recalled. “The hospital will also file a complaint against Jang Group in the UK and the US where it has been registered as a charity. This does not happen anywhere in the world.

“Here are the mafias blackmailing in the name of freedom of the press. They have different agendas. They are blackmailing and involved in slander against the government,” the prime minister said.

Calling the Peca law essential for the country, Mr Khan said it had nothing to do with freedom of the press. “Instead, good journalists should be happy with limiting fake news, as it will boost their credibility,” he said.

Referring to false reports by three major newspapers alleging the selection of the AJK prime minister by some sort of necromancy, he said if it had happened in the West, they would have to sell their businesses to pay for the defamation.

The prime minister said that contrary to his desire for a Pakistan with an independent foreign policy, the country joined the US-led war on terror and suffered 80,000 casualties, a displacement of 3.5 million and an economic loss of $150 billion when no Pakistanis had anything to do with 9/11.

“Leaders with money abroad and in offshore accounts can never make decisions in the interest of the nation. Don’t vote them out because they can never make independent decisions,” he said.

Highlighting his recent visits to China and Russia, the Prime Minister said Pakistan would import about two million tons of wheat and gas from Russia, while the outcome of the government’s agreements with China on the second phase of CPEC would be soon to be featured.

Why Putin’s Oligarchs Are Under Fire Amid Russia-Ukrainian War