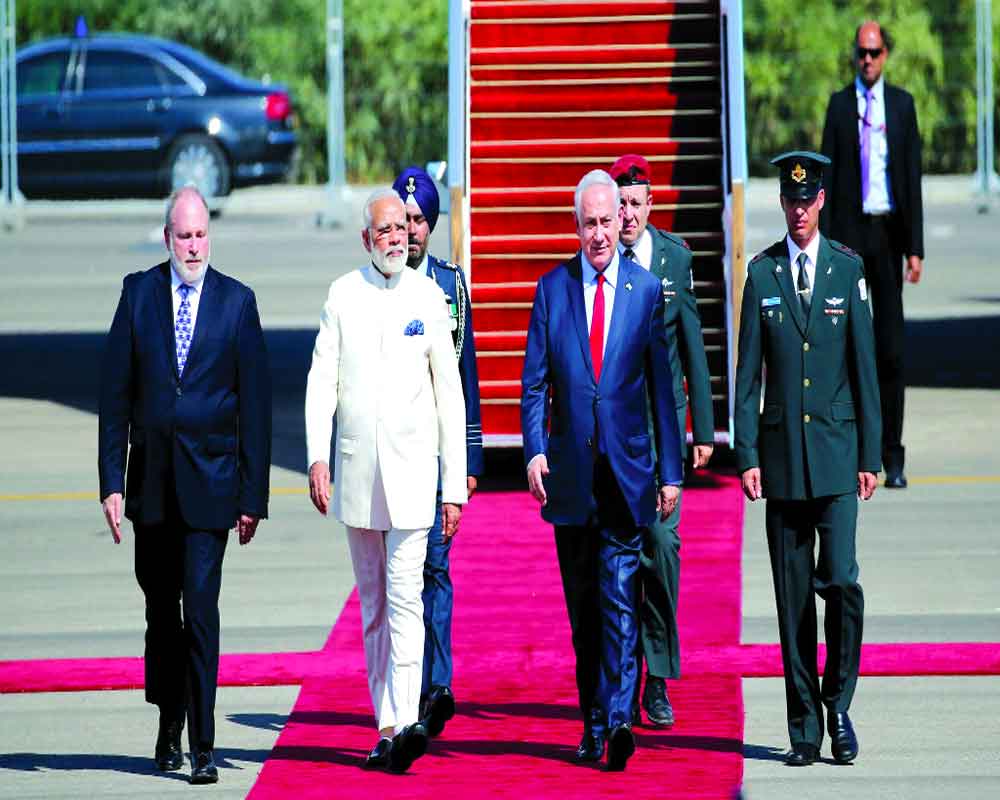 Through its multi-alignment policy, India has cut ties with Palestine and secured Israel’s cooperation in a series of defense measures

Bilateral relations with Israel are thirty years old, one of the aspects of which, according to sources, is that this country extends its military aid to India even during the period of the cold war, in particular during the 1971 war with the Pakistan. Its unconditional aid with ammunition and laser-guided missiles during the Kargil conflict years later had turned the battlespace in India’s favor. Israel’s contribution can be assessed only by the Phalcon airborne radar system and the joint production of the Barak missile defense system.

Previous governments could not find a balance between Israel and Palestine and therefore always saw Israel through the prism of the Palestinian issue. On the other hand, Prime Minister Narendra Modi in 2017 and 2018 visited Israel and Palestine respectively, and this marked the first ever visit by Indian political leaders. In 2018, then-Israeli Prime Minister Benjamin Netanyahu paid an official visit to India. Since then, relations between the two countries have been on an upward trajectory.

Security and Foreign Policy have recognized that India’s pursuit of political-strategic balance remains incomplete without Israel. Through the multi-alignment policy, India has reduced its relations with Palestine and has therefore made great strides with Israel in terms of cooperation in counter-terrorism measures, including intelligence sharing and the supply of missiles. The use of precision-guided Spice bombs in non-military surgical strikes strongly indicates the choice of weapons Israel can offer India. As Israeli Defense Minister Benny Gantz is on his next visit, it is becoming essential to analyze the possible contours of coordination between the two countries.

The Quad 2022 leaders’ joint statement condemned the Mumbai and Pathankot attacks and pledged to “take concerted action against all terrorist groups, including individuals and entities designated pursuant to UN resolution 1267 (1999). UNSC”. This is an important development as the perpetrators of 11/26 continue to be protected by Pakistan. The statement could indicate a crucial development to come. Is it possible that the CIA, Mossad and RAW could actively coordinate to use different tools of coercion against terrorist groups that have harmed the common interests of all three?

A possible coordination between the three agencies is necessary from another perspective. The recent use of rocket-propelled grenade launchers (RPGs) in the Mohali terror attacks and the findings that US military hardware left behind in Afghanistan is now landing in Kashmir broaden the horizon for Pakistan’s proxy war against the India. Dwindling foreign exchange reserves and increasing foreign debt apart from attacks by the Baluchis and Tehrik-e-Taliban Pakistan on the military establishment could lead to a full-fledged civil war in Pakistan. To divert attention, Rawalpindi could resort to terrorist attacks against Indian interests to escalate tensions that could endanger the peace and security of South Asia. The next few months are all the more critical for India’s security. In such a scenario, India’s operational readiness should be high.

To defeat terrorism, India should integrate its available and new technologies with the help of Israel and the United States. There may be active cooperation between the two countries for technology transfer or direct purchase of the Iron Dome air defense system to protect military installations subject to attack by Pakistan-based proxies. Rafael Advanced Defense Systems developed the Iron Dome. Its active cooperation with ISRO and DRDO can be sought to collaborate on futuristic AI-based weapons and precise weapons for external and internal security purposes. If made possible, it can significantly defeat Pakistan’s sinister objectives.

Israel has also gained expertise in intelligence weaponry where the adversary’s military and its proxies buildup are exposed internationally. The exposure of Hezbollah’s secret military deployment in 2010 and the 2018 secret atomic warehouse in Tehran are examples where Israel actively used its intelligence to avoid escalation. The weaponization of intelligence sends strong signals that covert operations have been exposed and must be stopped immediately; otherwise surgical strikes may soon follow. Furthermore, it serves as an essential tool in perception management and psychological warfare, which play a vital role in the construction of narratives in the home country and the international community apart from the opposing population. Intelligence coordination can be useful for India, as it can expose the launchpads of terror through the LOC. Such measures may also have the sword of being on the FATF blacklist that hangs over Pakistan. Nonetheless, the use of strategic communication seen in post-Pulwama non-military surgical strikes may be combined with intelligence weaponry to restrict the scope of Pakistan’s terrorist maneuvers.

Regarding energy security, it should be remembered that India was unable to materialize its dream of a TAPI and IPI pipeline because of the Pakistani factor. However, to overcome the geographic constraint of Pakistan, apart from other competing geopolitical interests like the Pakistani-Turkish alliance, Modi came up with the “Act West” policy. Other strategic interests include intelligence sharing, defence, cybersecurity and maritime security. From a futuristic perspective, the emergence of multilateral Mediterranean “security architectures” deepened with the discovery of natural gas deposits in Israel’s eastern Mediterranean offshore, Tamar (2009) and Leviathan (2010), in the exception of the Cypriot Aphrodite (2011) and the Egyptian Zohar (2015).

The rise of the EastMed energy alliance which intends to bring natural gas to Europe may be a key source of natural gas for India. If the Abraham Accord, which is already in place, can be extended to Saudi Arabia, natural gas can also be transported to India via undersea pipelines. The same week that Benny Gantz would be in India, Israeli NSA Eyal Hulata is expected to meet his American counterpart Jake Sullivan in Washington to normalize relations between Israel and Saudi Arabia. If all goes well, the alliance between Israel, the United States, Saudi Arabia and the United Arab Emirates would be in place, and India could join the alliance for its energy and security needs. Last year, the logic of India’s axes of strategic alliance prevailed with the first virtual meeting behind closed doors between the foreign ministers of India, Israel, the United Arab Emirates and the United States. India is poised to be part of formulating a structural framework that could be a win-win situation for regional and extra-regional actors to push terrorism-sponsoring countries away from expansionist forces.

As President Joe Biden has decided to keep the Iranian Revolutionary Guards on the US list of sanctioned terrorist organizations, this could negatively affect the prospects for a new nuclear deal with Iran. This will lead to heightened strategic polarizations in India’s western neighborhood, and China’s influence over Iran is bound to increase. Simultaneous geopolitical convergences between India, Israel and the United States to fight terrorism will also increase the threat factor. India and Israel should be cautious about attempts by various proxy groups to harm Israeli diplomats in India. For example, Tal Yehoshua-Koren, wife of the Israeli defense attache in India, was targeted in 2012 when an explosion took place near the Israeli embassy on the 29th anniversary of the establishment of bilateral relations. It is only through joint human and signals intelligence efforts that such attacks can be prevented. Overall, the future is bright for India’s overwhelming presence in West Asia.

(The author is an assistant professor at Central Punjab University, Bathinda. Opinions expressed are personal.)

Transocean (RIG) up 3.3% since last earnings report: can it continue?