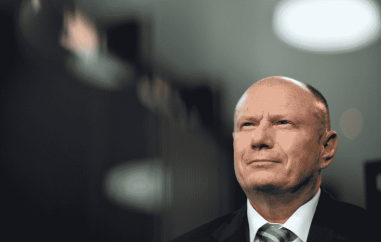 So far, at least, “Nickel King” Vladimir Potanin is Russia’s ultimate survivor.
Unlike many notable Russian oligarchs, he was not sanctioned by either the United States or the European Union.

And as Western companies left Russia because of these sanctions, imposed in retaliation for Moscow’s invasion of Ukraine, it recovered assets to develop its own banking business.
On Monday, Potanin’s Interros holding company said it bought United Card Services, the Russian unit of U.S.-listed Global Payments, for an undisclosed amount.

Last week, he bought 35% of TCS Group Holding, owner of Russia’s first online bank, from its founder Oleg Tinkov, who had bitterly criticized the war after TCS’ share price plummeted.
Three weeks earlier, the boss of the mining giant Nornickel had bought Rosbank from Société Générale, to which he had sold it more than a decade earlier.

This deal could further Potanin’s fintech ambitions. Rosbank is the banking partner of Atomyze, a blockchain platform in which Interros and Nornickel’s Global Palladium Fund are investors.
Global Palladium Fund is one of the first commodities companies to get into digital trading, and Atomyze is the first Russian company authorized to trade digital assets by the government, which is trying to promote a new sector despite objections from the central bank.

Potanin is one of the richest people in Russia, although his net worth largely depends on the value of his 36% stake in Nornickel, the world’s largest producer of palladium and refined nickel – currently around 17 billion ($23.5 billion).

Potanin’s position will also have been strengthened by his decision last December to move his offshore company Interros Capital from Cyprus to the economic zone of Russky Island in Russia’s Far East.
Western governments have not explained why Nornickel was left out, but the explanation may lie in its importance to a global economy under acute stress from soaring energy costs, rising rates of interest and post-pandemic supply chain issues, including metals for electric vehicle production.

Previously, Potanin had defended foreign investment in Russia, urging Russian authorities to take a cautious approach to such moves. And if the expropriation of foreign property or money is carried out, it will take Russia back to 1917, when the Soviet revolution took place. What shows – Potanin is one of the remaining open businessmen in Russia, advocating the settlement of contentious issues rather than confrontation.