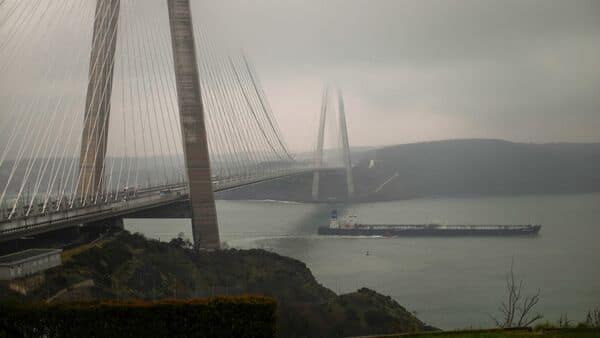 Daily freight rates for mid-size Aframax tankers, the workhorses of crude oil in the Black and Baltic Seas, have jumped to around $30,000 from around $10,000 before the invasion, according to freight brokers and tanker owners. Such increases are not unusual during the war.

A small number of tankers continue to service Russian ports, and owners willing to take the risk of navigating the Black Sea conflict zone can fetch more than $200,000 a day, according to brokers and owners. But most are not.

“Due to the complexity, we will stay away from Russia,” said Lars Barstad, managing director of Norwegian company Frontline Management A/S, one of the world’s largest tanker owners, operating 74 vessels. . “There’s a lot of money to be made, and it’s still legal, but very difficult to do in a good way.”

At least a dozen tankers carrying Russian crude have been temporarily seized or delayed at European ports by customs authorities over the past week, according to brokers and owners. Vessel delays increase the cost of transporting crude, as vessels stay in the water longer. The conflict in Ukraine helped lift crude futures last month above $100 a barrel for the first time since 2014.

“They will be holding your vessel to see if it has any connection to blacklisted Russian companies,” said a Greece-based tanker owner, one of whose vessels was delayed in the UK. “It’s not worth it”.

But shipping traffic near Russian ports has shrunk by about half, brokers say. Maritime data provider Windward said the number of Russian-owned vessels that are on the market and available for charter this week was triple that of Feb. 28.

The drop in maritime traffic comes amid an exodus of Western multinationals from Russia, including big oil companies like Shell PLC and BP PLC. The United States on Tuesday banned Russian oil shipments, while the European Union said it plans to cut oil and gas imports from Russia by two-thirds by the end of the year. .

The oil giants charter hundreds of tankers from owners such as Frontline to transport oil around the world. Barstad said he expects tanker prices to stay high or rise as oil importers have fewer options to buy crude and as the market adjusts to replace some 2.5 million barrels per day of Russian oil transported by sea.

The renunciation of Russian ports and vessels has led to increased traffic and costs elsewhere in Europe. Ports in Cyprus, Bulgaria, Latvia and Finland are experiencing an increase in congestion of up to 80%, according to Windward. In one case, international commodity trader Trafigura Group Pte. agreed to charter an Aframax tanker for $27,500 a day, 71% more than a similar-sized vessel it had leased a month earlier, according to data from shipbroker Braemar. Trafigura declined to comment.

Not all carriers choose to pick up Russian cargo. Major Chinese state-owned operators like China Merchants Energy Shipping and Cosco Shipping Energy Transportation continue to transport crude from Russia on their ships or on chartered tankers, people involved in the matter said. “Russian oil is still legal and someone has to move it to keep the market relatively stable,” a senior Cosco official said. “If other sources open up, we will look into them.”

Tankers carrying Russian fuels are also finding other ways to deliver their products. Liquefied natural gas shipments that were barred from entering the UK were unloaded in the Netherlands and Belgium, according to Kpler, a commodity intelligence provider. The company said two supertankers that had loaded Russian crude via ship-to-ship transfers off Denmark were en route to Chinese ports and expected to arrive in late March.

“Oil flows are like a river and when you cut one off – Russian oil – it will flow elsewhere to reach its destination,” Barstad said. “When a refiner seeks a new source of oil, there are inefficiencies in the movement, ships sail longer, which increases the cost at the pump and brings in more money for tanker owners.”

Tanker owners, seeking to replace Russian crude, are waiting for governments to remove restrictions on shipping products from Iran and Venezuela. But any deal with Iran, which produces about 2.4 million barrels of oil a day, will be part of a new nuclear deal, currently being negotiated between US and Iranian officials. Venezuela, which is also under Western sanctions, used to produce around three million barrels a day, now pumps around 700,000 barrels a day, oil brokers and tanker owners said.

“You need to get your basic energy needs from a reliable source,” Barstad said. “For Europe, Russia was the source, but it is no longer reliable, so you have a problem.”